Back to the Sea

“We are tied to the ocean. And when we go back to the sea, whether it is to sail or to watch – we are going back from whence we came”.

August heralds the end of Summer and the last few weeks before the start of school. For many the lure of days spent on the water is seductive and restorative, and in today’s political climate it would be wise to seek the serenity of the sea before the angst to come this autumn. This week our imagery features the waterways from which we come. 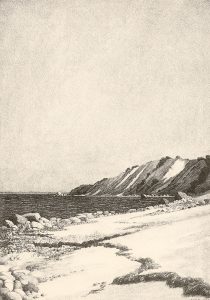 Barker was born in Chicago where his parents were visiting on business but his true home was Moylan, Pennsylvania. He was educated at the Pennsylvania Academy of the Fine Arts, Haverford College and he eventually earned a Ph.D. in Greek from the University of Pennsylvania. He initially taught Greek at Haverford and served as assistant professor of fine art at Swarthmore. Later, he served the public schools of Wilmington, Delaware for eight years as director of art education.

In 1926, Barker discovered lithography and an ability to do on stone what he was doing with charcoal. In 1927, he met master lithographer, Bolton Brown, with whom he studied and became devoted to lithography. He was intent on recording the landscapes and farms of his native area. In 1934, he was given a solo show at the Smithsonian.

From Martha’s Vineyard we travel to Montauk and its beaches. Art Werger’s 2016 etching and aquatint, “Tidal Shift: Panel 1”, was created in an edition of just 25. 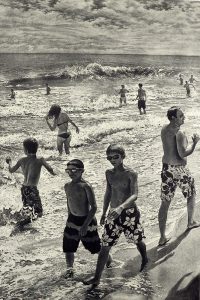 Art Werger writes that: “Tidal Shift” refers not only to the endangered coastal tideland but also to the psychological mindset of the characters. At first glance, the image projects seaside relaxation but there is a subtext in that the participants of this play are oblivious to the forces of the rising ocean and the impending consequences of the consumerist indulgences. The main visual emphasis is on the lighting of the natural setting but there is also a strong emphasis on the textures of waves, clouds and sand eliciting a visceral response, and on patterns and compositional placement of the figures that crowd the scene.”

Art Werger (American, b.1955) is a Professor of Art in the Printmaking program at Ohio University where he was recently named a Presidential Research Scholar. He also taught at Wesleyan College in Macon, Georgia, where he served as Division Chair of the Fine Arts.

Werger recieved his BFA in printmaking from Rhode Island School of Design in 1978 and his MFA from the University of Wisconsin in 1982. As a master printmaker, he works in aquatint, etching and mezzotint, with some of his images printed in multi-plate colors.

Werger has received over 250 awards in national and international exhibitions including: Award of the Rector: International Print Triennial in Krakow, Poland, 2012 and Grand Prize: Third International Mezzotint Festival in Yekaterinburg, Russia, 2015.

After a long day at the beach we succumb to the beauty and serenity created by Frederick Mershimer in “Moonlight” (19 7/8 x 20 1/8) a dramatic 2010 mezzotint created in an edition of 90. The moon over Montauk at night creates a stunning effect on both the clouds overhead as well as on the water below. The energy so evident in “Tidal Shift” has disappeared and a sensual calm pervades. 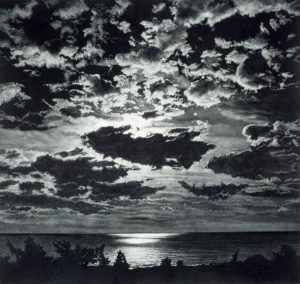 Moody, mysterious, majestic – these are some of the ways to describe the mezzotints of Frederick Mershimer. His images travel through the serenity of a Brooklyn neighborhood on a still night, rush past the frenzy of taxis jockeying for position around a New York cathedral, and parade down the fire-lit streets of New Orleans in its mythical Mardi Gras celebration.

The evocative realism he creates transports the viewer beyond first appearances to reveal the hidden beauty and vitality of his scene. At first glance, his work can be interpreted as bold naturalism. Yet, he skillfully choreographs lighting and detail while altering perspective to draw the viewer’s attention to the essence of the piece.

Frederick Mershimer received a BFA from Carnegie Mellon University, where he majored in painting and drawing. After moving to New York in 1983, he studied printmaking at The New School, Pratt Graphics Center (1984 – 1987) and Manhattan Graphics Center (1988 – 1992). He was initially drawn to the mezzotint process because it echoed his approach to drawing. In 2007, Stone and Press published a catalogue raisonné of his work, titled “Frederick Mershimer Mezzotints 1984 – 2006”.

Mershimer’s works are included in the collections of the Brooklyn Museum, the Cleveland Museum, the Corcoran Museum, Fogg Art Museum, Georgetown University, Library of Congress, the McNay Art Museum, New Orleans Museum of Art, National Museum of American Art and the Whitney Museum.

Our travels take us to Canada and the Anne Dykmans color mezzotint, “Brume” (Mist) created in 2000 in an edition of 50. A lone boatman rows through the mist in this Canadian waterway as rays of sunlight beam through the trees. Anne Dykmans employs her superb command of engraving techniques, especially mezzotint, to create a special light which brings out the beauty in the simplest of everyday subjects. In addition to the beauty of form and light, she is also able to evoke human emotion as in this homage to her father.

Professor and printmaker, Anne Dykmans was born in Verviers and studied engraving at the National School of Advanced Studies in Art and Architecture. Her award-winning images have been exhibited at international competitions and collected by museums worldwide.

From the calm of the Canadian lake we travel to the dramatic landscape of Iceland. Udo Claassen (German, b. 1948) created the mezzotint“Icelandic Landscape” (19 ½ x 27 ½ in) in 1985 in an edition of 40. Many of the lakes in Iceland are of tectonic origin. From the soft blue-grey washes of coastal estuaries and floodwater plains, to black flatlands with their gleaming silver rivers, to expanses of blinding white glaciers—a flight over the Icelandic heartland is often as much of a treat as the destination.

Claassen was born in Itzehoe in the state of Schleswig-Holstein. He was introduced to the medium of mezzotint by seeing a book on the work of master engraver, Yozo Hamaguchi and he learned the medium through his own experimentation. Claassen has been working in mezzotint since 1978, although he considers his primary artistic pursuit to be drawing and painting. The artistic influences on Claassen have been C. D. Friedrich, Wang Wei and Ansel Adams.

From the isolated glaciers of Iceland, we travel to the heavily populated ocean near Hong Kong. Craig McPherson’s color mezzotint, “Ocean Terminal” (Fitzwilliam L1) was created in 1994 in an edition of 45 and measures 29 7/8 x 30 inches. This image is related to the huge murals of world harbors that hung in the mezzanine of the American Express Corporate Headquarters in lower Manhattan. On September 11, 2001 the North Tower of the WTC, directly across West Street from the American Express building, was once again attacked and fell into ruin. The force of the blast from the collapse of the North Tower blew in the windows and filled the AmEx lobby with dust and debris. The Harbor murals encircling the mezzanine took the force of the blast. For many months the paintings were encased in wet cement debris, while being exposed to the elements and the acrid smoke billowing from Ground Zero. Under such conditions it was unlikely that the murals would have survived. 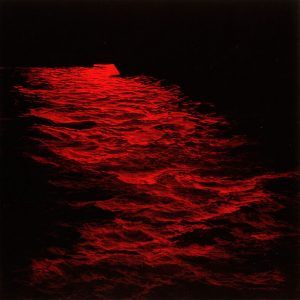 Yet, they did, and relatively unscathed. The team of hazmat-suited conservators hired to do the final water cleaning commented afterwards that the paintings’ remarkably fine condition could be attributed to McPherson’s technical skill at producing an extremely tough paint film. No paint retouching was required.

Craig McPherson is known for his New York murals, paintings and mezzotint engravings. In 1998 he had his first museum retrospective at The Fitzwilliam Museum in Cambridge, England. The show traveled to The Hunterian Museum in Glasgow, Scotland. In 2008 McPherson was commissioned by the Frick Museum to create an exhibition reflecting the heritage of steel production in Pittsburgh as part of that city’s 250th anniversary celebration.

During the late 1970s and early 80s, McPherson concentrated on New York City landscapes, primarily set at night, creating a series of paintings and mezzotints including the iconic image, “Yankee Stadium at Night”. His work has been described as “cinematic,” the night scenes likened to film noir.  In 2017, The British Museum included “Yankee Stadium” in an exhibition, “The American Dream: Pop to the Present”.

Craig McPherson’s work is included in numerous museum, corporate and private collections in the U.S. and abroad. These include The Metropolitan Museum of Art; The British Museum, London; The National Gallery of Art, Washington, D.C.; The Art Institute of Chicago; The Carnegie Institute of Art, Pittsburgh; The Fitzwilliam Museum, Cambridge, England; and the Whitney Museum of American Art.

We finish our summer tour in Italy. John Taylor Arms’ 1919 etching and aquatint, “On Lake Como, Number 2” (Fletcher 22) was printed in color in an edition of 73. This is a rare impression of this image that was printed in black and white. A large white sailed vessel glides lazily across a lake as smooth as glass. The white of the sail stands out as does the snow-capped peaks of the pre-Alpine Larian triangle. Far in the background of the piece is another small boat that seems to float at the base of the main peak. It would be hard to conceive of a better place to end our journey on the water. 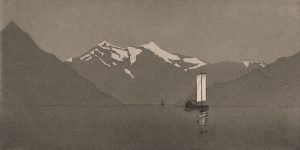 Arms studied architecture at Princeton and MIT and later became the country’s finest etcher of his age. His renderings of European and American architectural subjects are not only beautiful, but they are unrivaled in their technical virtuosity and nuanced light.

In a recent exhibit, the Cleveland Museum noted: “Arms believed that art could be a tool for the spiritual and moral improvement of mankind and that Gothic cathedrals represented ‘the most significant expression of man’s aspirations.’ He viewed printmaking as a vehicle for disseminating images of subjects that would uplift and inspire contemporary society.”

Arms served as President of the Society of American Etchers and as an ambassador for American printmakers and printmaking throughout the world.