As I watched the news from Helsinki yesterday, I saw President Trump lose his way. He
seemed to forget his oath of office “to preserve, protect and defend the Constitution of
the United States”. In disgust I turned off the news.

Out of window of my house, lights and cameras appeared. Tents were being erected.
Dozens of would-be stars arrived dressed in fancy long gowns or tuxedos. Our street
and those adjacent blossomed with giant trucks and trailers filling every parking spot
in sight.

Next door is a dramatic Romanesque Revival mansion with exterior walls of rock-faced
masonry and smooth-stone highlights. Nine bedrooms are spread over four floors and
22,000 square feet. This ‘location’ seems to be a favorite for Hollywood. This week
filming of “The Purge” is happening. The ten episode TV series is expected to debut
this September.

I’m not a big fan of those movies; in truth, I haven’t seen any of them. However, I know
the general plot line and no theme, however dark, seems farfetched in the Trump era.
With the Trump show on TV and The Purge happening outside our door, is it any
wonder that our images this week are a wee dark? 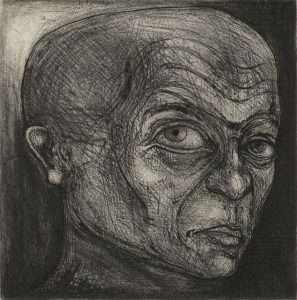 Seyed Edalatpour created One of Twelve, VI, a 1995 drypoint, etching and engraving issued in an edition of only 12 impressions. The artist was born in Iran in 1962 and relocated to England in 1983. His world seemed built on a foundation of shifting sand and his work often reflected the shock of displacement. This image calls to mind a Roman head from the first century.

Seyed Edalatpour was trained as a painter but turned to sculpture and printmaking when he went to England. He studied with Ana Maria Pacheco at the Norwich School of Art. Edalatpour writes that “his drawings and graphic works are not intended as preparation for sculpture but are simply different ways of exploring a coherent theme. They stand as independent works in their own right though the ideas they generate are often realized in other media”.

Fritz Eichenberg experienced firsthand the wrath of a corrupt government and had to flee his native Germany when Hitler rose to power. His art often mocked the excess of government and the ills of a chaotic society. This 1972 wood engraving, The Follies of Princely Power”, in which the ‘princes’ play for power is one of ten originals created to illustrate Erasmus’s “In Praise of Folly”. The image measures 18 x 12 inches.

German born wood engraver and lithographer, Eichenberg studied at the School of Applied Arts in Cologne before moving to Berlin where he was a reporter and staff artist for the Ullstein Publishing House. When Hitler came to power in 1933, Eichenberg moved New York where he taught at the New School for Social Research and worked on the Federal Art Project. He taught at the Pratt Institute and served as the director of the Pratt Graphics Center where he edited ‘Artist’s Proof’, a journal on printmaking.

In 1966, Eichenberg moved to Rhode Island and chaired the Art Department of the University of Rhode Island in Kingston. His wood engravings and lithographs are almost always associated with literary sources. His prints are in numerous collections including the Metropolitan Museum of Art, the Library of Congress, the Hermitage and the Vatican. 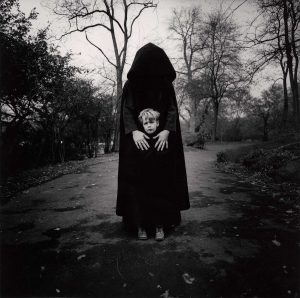 Arthur Tress created “Death Fantasy”, a vintage silver gelatin photograph of a child in the clutches of a dark cloaked figure. Tress conducted interviews with the participants in an art workshop for children and documented the nightmares and fantasies he heard from the kids. Their emotions were acute and the fears all-encompassing. In “Death Fantasy”, Tress portrays a young boy under the black cloak of a hooded figure along a path of leafless trees. The face of the child and his small booted feet are held close by the splayed hands of the ghoulish figure.

The Getty Museum recently acquired more than 80 works by Arthur Tress for its collection. Tress has created an individual mythology in a universe of kitsch to make sense of the meaning of life, death, and the hereafter. In 1972 he got a National Endowment for the Arts grant for his “Dream Collector” series. In 1980 he published a book on the male nude called, “Arthur Tress: Facing Up, A 12-Year Survey”. His work is in the collection of numerous museums and institutions, including the New York Museum of Modern Art, the New York Metropolitan Museum, the Whitney Museum of Art, and the Art Institute of Chicago. 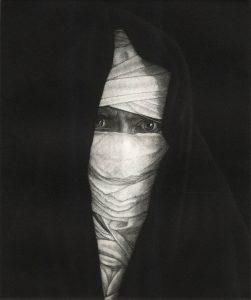 James Groleau’s “The Absence of Passion” is of a suite of fifteen mezzotint portraits reflecting the trauma of warfare. Tempered by the partial concealment of facial expression, the images depict a range of emotional responses to war, from rage to resignation. The wrappings can be viewed as veils that separate one human being from another, that separate gender within the Islamic world, and more broadly, that separate cultures. The portrait, “Najaf” is a mezzotint issued in an edition of 20.

James Groleau was born in Lewiston, Maine in 1960. His first serious drawings were political posters aimed at discouraging registration for a military draft. He studied at the Massachusetts College of Art and the City College Printmaking Program in San Francisco.

The mysterious mezzotints of James Groleau, whether the earth-toned studies of death and personal introspection, or the brightly colored floral and portrait series, or his intense portraits of Iraq reflect an interest in order in the universe and man’s place within it.

He exhibits both nationally and abroad and has received numerous awards. He is a member of the California Society of Printmakers and a board member of the Graphic Arts Workshop in San Francisco. 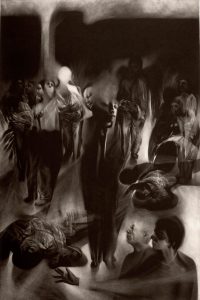 In his 2000 mezzotint, “Chute I” (Fall I), Maurice Pasternak portrays tortured figures and ghostly spectres appearing bewildered and disoriented. It was issued in an edition of 80 and measures 29 ½ x 19. These souls have endured a significant fall from grace.

Maurice Pasternak was born in 1946 in Brussels and pursued the study of art from 1963 – 1968 at ENSAV, Belgium’s national academy for the training of students with superior artistic ability. Since graduation, he has engaged in the creation of drawings, pastels and mezzotints. In addition, he served (beginning in 1982) as the chief professor of art and the designer of the art curriculum at his alma mater. In 1994, Pasternak had a solo exhibition at the Musee des Beaux-Arts de Mons in Belgium.

His work has been awarded more than twenty international prizes at biennial competitions throughout Europe, Asia and the United States including the Prix Special De L’Edition at World Print Four in San Francisco and the Walker Prize at the Philadelphia Print Club. He has had numerous solo exhibitions on various continents and his work is included in museums in Japan, Taiwan, Belgium, Poland and the United States. 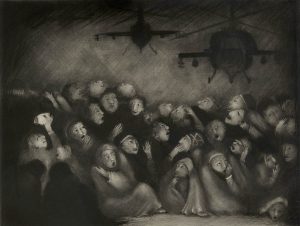 Ana Maria Pacheco, in her 1995 drypoint “Lux Aeterna I” portrays the fear and feelings of the displacement of refugees cowering beneath helicopters overhead. The title of the work refers to the Requiem Mass: ”Rest eternal grant unto them, O Lord: and let eternal light shine upon them”, placing images of atrocity in the context of prayer and commemoration. This work seems to combine ancient imagery in contrast with the modern war machine.

Pacheco’s work has been widely exhibited and she has had notable exhibitions in many cities including London, Edinburgh, Belfast, Oslo, Dakar, New York, Boston, Miami and São Paulo. Her work is in a number of private and public collections. 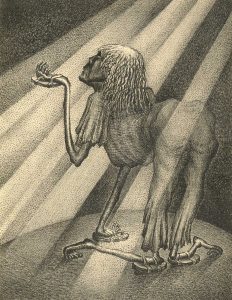 Caroline Durieux, in her 1949 lithograph, “Survivor”, shines an extra-terrestrial spotlight on this battered subhuman figure; he does not look directly into the light but away from it, raising his hand like a beggar. The worn pads on his hands and knees show that he has walked on them, like an animal, for a long time. There is nothing to suggest that he can stand. The beam of light looks cold, machine-like, impersonal. It was issued in an edition of 20.

Durieux joined the art faculty at Newcomb College and taught from 1938-43. She also served as the Director for Louisiana’s WPA Art Project, which she administered without regard for the race of the participants within a totally segregated society.  In 1943, she left New Orleans to teach at Louisiana State University where, in the early 1950s, she began experimental work on electron printmaking, demonstrating the peaceful use of atomic technology. She also successfully produced the first color cliché verres while simultaneously perfecting her technique for making electron prints.