In Her Own Words

When we look at an image, we often wonder what the artist had in mind when he/she was in the process of creation. Most artists don’t want to divulge their thinking because they want the viewer to bring their own personal interpretation to it. Caroline Durieux (1896-1989) was usually adamant about not divulging her thought process. However, in “An Inquiry into the Nature of Satire”, her 1949 master’s thesis at Louisiana State University, she let us in on her thinking on a select number of pieces. 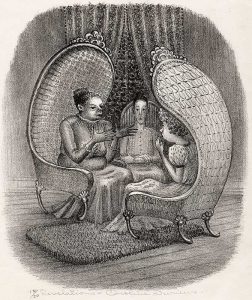 A satirical artist distorts the shapes of people and things to make them ridiculous. Inanimate objects are made to behave as if they were living creatures and living creatures are made to look like things. In this print, two ancestral chairs are emotionally upset by what the storyteller is revealing to her companions. The chairs bend and writhe as if in their opinion, that which is being told would be better left unsaid. The expression of disapproval on the face of the maiden aunt in the rear of the group supports the conservative attitude of the old chairs and the nap of the hooked rug on the floor stands on end. The youngest of the three women makes a movement of surprise in contrast to the static posture of the maiden aunt and the stolidly purposive gesture of the middle-aged storyteller.

“At ev’ry word a reputation dies.”
Alexander Pope, The Rape of the Lock, canto III, line 16 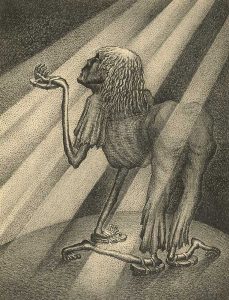 An extra-terrestrial spotlight falls on this battered subhuman figure; he does not look directly into the light but away from it, raising his hand to it like a beggar. The worn pads on his hands and knees show that he has walked on them, like an animal, for a long time. There is nothing to suggest that he can stand. The beam of light looks cold, machine-like, impersonal. Scornful satire marks the limit of comedy for “. . . there is nothing funny about scorn which comes round again almost to the attitude of divine comedy.” James Feibleman 208, In Praise of Comedy

“The spectrum analysis of satire runs from the red of invective at one end to the violet of the most delicate irony at the other.” David Worcester 16, The Art of Satire

The feeling expressed in Plantation Garden is that of a dirge with ironic overtones; it is sad, nostalgic yet satirical. The bent figure of the old lady, the ancient trees, the static moss, all seem to belong to the past; even the lady is old. For contrast, a ray of late afternoon sun lights up the only young note in the picture: perennials in the foreground.

When “we are satirical and we are friendly at the same time, the consciousness of the friendship gives a regretful and tender touch to the satire, and the sting of the satire makes the friendship a trifle humble and sad.” George Santayna 255, The Sense of Beauty

This concept of satire mixed with friendship comes closer to humor because there is less censure involved. In Plantation Garden, the satire is tempered by a feeling of empathy.

See other works by Caroline Durieux at http://www.stoneandpressgallery.com/caroline-durieux/ 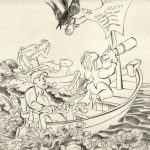 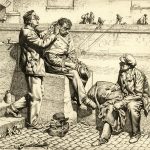