Labor Day weekend is upon us. It conjures up many images: the end of summer; last weekend at the shore; barbecues; sales of appliances; going back to school; and in New Orleans a huge festival of the LGBT community, Southern Decadence. The image that doesn’t seem to resonate is the original intent of the day – a celebration of the huge contribution made by the American workers and their unions to the country’s economy. They should not be forgotten.

A newly issued mezzotint by Art Werger, “The Act of Forgetting”, is imagined through the fleeting image of a man formed by waves advancing and then retreating on the shore. Each wave seems to have only a temporary impact but the constant repetition will erode and change the land. It may suggest that humans are oblivious to the forces of the rising ocean and the impending consequences of their actions.

Printmaker and Professor of Art in the Printmaking program at Ohio University, Werger was recently named a Presidential Research Scholar. 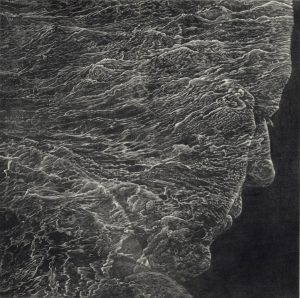 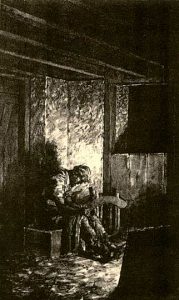 Rather than forgetting, we should be celebrating the dignity of work and the American worker. Albert Barker often depicted the farm worker as in his 1934 lithograph, “In a Day’s Work”, showing a man sharpening his tools in the barn. Barker chronicled rural life in the Pennsylvania county side.

Albert Barker was educated at the Pennsylvania Academy of Fine Arts, Haverford College and he eventually earned a Ph.D. in Greek from the University of Pennsylvania. He initially taught Greek at Haverford and served as assistant professor of fine art at Swarthmore. Later, he served the public schools of Wilmington, Delaware for eight years as director of art education.

We move from the rural worker to those who work in the hot and sweaty environment of a steel mill. In the late 1930s Sheffield Steel in Kansas City wanted an artist to document their processes. They called Thomas Hart Benton at the Kansas City Art Institute but he passed on the project. He suggested two of his colleagues, John deMartelly and Jackson Lee Nesbitt. Nesbitt was more willing to brave the heat of the mill since the drawings were to be made on site. Nesbitt created his 1938 etching, “Charging Molten Metal”, at the Sheffield Steel Plant in Kansas City. This impression is from the artist’s personal collection and bears annotations about the charging process. He notes” “Molten steel from a holding crucible is being charged into an open hearth furnace.”

Jackson Lee Nesbitt would be hailed as one of the few artists to document the industrial process in such a dramatic way. This image is one of twenty images of mills and mill workers that he drew at five different companies: Sheffield Steel in both Kansas City and Houston, ARMCO, Butler Manufacturing and Omaha Steel.

Jim Steg, in his 1951 lithograph, “The Punch Room (Factory Series)”, depicts workers performing various tasks in a large work area. This is one of the images pictured in the exhibition catalog for his 1978 solo exhibition at the New Orleans Museum of Art. It was issued in an edition of 10.

Jim Steg (American 1922-2001), a longtime beloved professor of art at Newcomb College of Tulane University, was both an innovator in the field of printmaking, and an artist at the forefront of several major twentieth-century movements. After graduating from Rochester Institute of Technology, Steg pursued graduate studies in art under Mauricio Lasansky at the University of Iowa.

Labor Day is a celebration of American workers. In New Orleans, it’s also the weekend for celebrating the LGBT community in a festival called Southern Decadence. This late summer festival is always hot as is this man in “Caution: Man at Work”, who’s wearing only work boots. This vintage silver gelatin photograph was created by Arthur Tress in 1995. 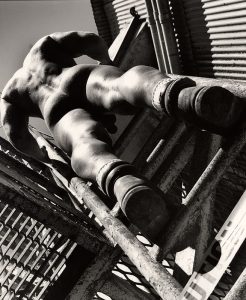 Arthur Tress, born in 1940, is one of America’s most prodigious and diversified photographers. In 2001, the Corcoran Gallery of Art featured a retrospective of his work entitled “Arthur Tress: Fantastic Voyage: Photographs 1956-2000” which took an intimate look at his long and varied career. Recently the Getty Museum has acquired 82 images by Tress.

Art Inquiry
It’s Back to School Time!Artists, Elizabeth Catlett
Take Me Out to the BallgameArt Werger, Artists, Bill Murphy