In my tenure at Tulane I played a very small role in clearing some bureaucratic hurdles that enabled Adam, a young man from Kentucky, to pursue his dream of enlisting students to raise service puppies-in-training. Adam was a student intern in my office and where Adam went, his golden retriever service puppy, Kipper, went too. 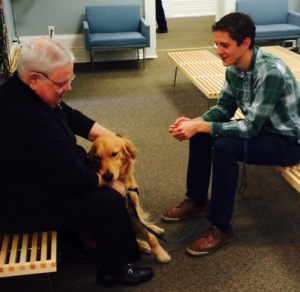 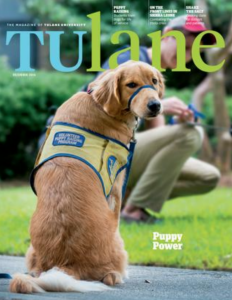 A university Admission office is a high profile place where thousands of parents visit annually to evaluate whether to entrust their children to your care for four years.  I wondered how having an animal in the office would be received but I needn’t have. Kipper brought out the innocence, playfulness and humanity of everybody who came through our office.  I did however became concerned that the humans would interfere with the discipline and routine that a service animal needed to master.

The experiment was a tremendous success as reported by the university press upon Kipper’s graduation:

“Kipper began his education on the Tulane University uptown campus. He recently finished graduate school and has his first job. It’s already a tail-wagging success.

Earlier this fall at a graduation ceremony, Kline proudly handed over Kipper’s leash to a family who had been waiting for a service dog for their 8-year-old son Jamey, a third-grader who has spinal muscular atrophy.” 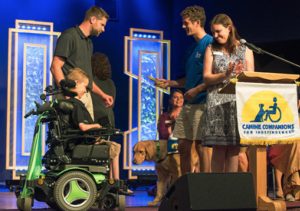 This week Stone and Press will feature images of our friends in the animal kingdom.

For many, life begins in the nest as depicted in this dramatic overhead view of three eggs awaiting the return of a parent.  This 2016 mezzotint, by Erling Valtyrson, was issued in an edition of 30.

Valtyrson began drawing at a very early age, creating characters and telling their stories. His formal training was at the Art Institute in Bergen, Norway after which he received a fellowship to pursue a career as a printmaker. His focus has always been on the medium of mezzotint which requires great precision. He does not work from sketches, preferring to be impulsive when preparing a plate. His subject matter centers on still life and portraiture, always in a naturalist style. Valtyrson’s work is collected internationally but most strongly in Japan. It is included in the National Gallery, the Contemporary Museum, Bergen University and the private collection of Queen Sonja. 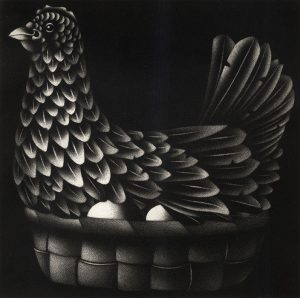 In this 1971 mezzotint, the eggs in the nest are being nurtured by a sitting hen. Poule is one of a series of images by Mario Avati released in his Noah’s Ark portfolio. Born in Monaco of Italian parents, Avati lived in Paris for most of his life. He worked in Nice at the Ecole Nationale des Arts Decoratifs and later studied with Marc Chagall at the Ecole des Beaux Arts. He began his professional career as a printmaker in 1947 and started using the mezzotint medium by 1950. In the late 1960s, Avati was instrumental in the contemporary development of color mezzotints. His work is represented in the permanent collections of museums throughout the world including: the Musee du Louvre, London’s Victoria and Albert Museum, the Museum of Modern Art in Tokyo, the Metropolitan Museum and the Museum of Modern Art in New York, the Chicago Art Institute, and the Philadelphia Museum of Art.

However, fertilized eggs are often seen as a source of food by lurking predators like the Alligator. 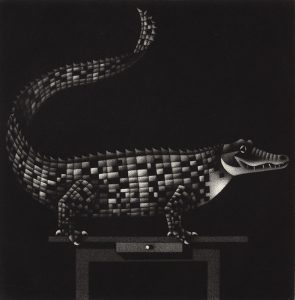 From classic inspiration, the work of Avati, turns almost exclusively around the still life – fruit, flowers, or animals ( e.g. the alligator), with a treatment of a wide geometric rigor. However do not miss the occasional note of humor. Inspired by the work of Giorgio Morandi (1890-1964), Mario Avati organized this print in a manner recalling Morandi’s tables.

Is his use of the table as a perch for this predator in homage to Morandi or is he perhaps suggesting the idea that the gator has itself become a source of food in certain areas.

Animals enrich our lives in so many ways. They bear our burdens as working partners, bring beauty to our world and serve as loving companions to so many.

Jackson Lee Nesbitt’s Watering Place is an etching of nature where a boy and his two mules pause for a break along the Illinois River in Oklahoma. Nesbitt (1913-2008) was a student at the Kansas City Art Institute where he studied under Thomas Hart Benton (1889-1975). Watering Place is the first edition Nesbitt created for the legendary Associated American Artists group.

The graceful beauty of birds flying over the Florida Everglades is captured by Victoria Hutson Huntley (1900-1971).  Andante is the name of this 1963 lithograph created by lithographer and muralist Victoria Hutson Huntley who grew up in New York City and studied at the New York School of Fine and Applied Art and at the Art Students League, where she studied with George Bridgman, John Sloan, Max Weber, and George Luks. She was elected an Associate Academician at the National Academy of Design. Her work is held by many institutions including the Museum of Fine Arts, Boston, the Whitney Museum, The New York Public Library, and the Metropolitan Museum of Art. 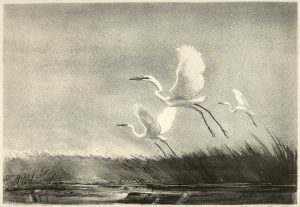 Some artists have depicted birds and animals in anthropomorphic situations such as in Dinner Gathering, an etching, aquatint, and drypoint by Sharon Augusta Mitchell (b.1960).  I’ve always thought that other titles could be possible like: The Deans’ Council or Board of Directors. Mitchell chose to ignore abstract expressionism and became shamelessly representational. She credits the usual old masters in particular Albrecht Durer (1471-1528) whose engravings were an inspiration.

We come full circle from the story of Kipper to the saga of Cecil, the beloved companion of artist Carol Wax (b.1953) 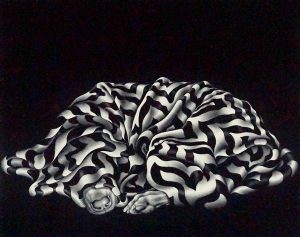 Under Wraps by Carol Wax

This is a clever rendition of the artist’s dog, Cecil. The Weimaraner is totally covered by a striped fabric with only the snout and one back paw peeking out. It could be seen as a totally abstract composition but the glimpse of the dog provides warmth and humanity. This mezzotint, created in 2008, was released in an edition of 75 and is signed in pencil. Carol Wax originally trained to be a classical musician at the Manhattan School of Music but fell in love with printmaking. Soon after she began engraving mezzotints she was asked by the renowned print dealer Sylvan Cole to exhibit at Associated American Artists Gallery, launching her career as a professional artist/printmaker. With the publication of her book, The Mezzotint: History and Technique, published by Abrams, 1990 and 1996, Carol added author and teacher to her credits. In the ensuing years she has expanded her repertoire of mediums beyond printmaking into other works on paper and painting. Her compositions reflect an appreciation for antiquated machinery and vintage textiles.

Recognition of Wax’s art includes an Individual Support Grant from the Adolph and Esther Gottlieb Foundation, Inc., two Artist Fellowships from the New York Foundation for the Arts, a Concordia Career Advancement Award from NYFA, The Louise Nevelson Award for Excellence in Printmaking from the American Academy of Arts and Letters, and residences at The MacDowell Colony and Marie Walsh Sharpe Art Foundation’s Space Program. A selection of the many collections that own her prints are The Metropolitan Museum of Art, The New York and Boston Public Libraries, The Philadelphia Museum of Art, The Library of Congress, and The National Museum of American Art, Smithsonian Institution. 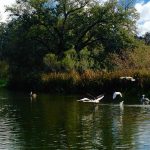