This week we celebrate our nation’s independence at a time when facts are being questioned and truth is under attack. Some speak of family values while separating children from their families. Others turn their backs on immigrants while ignoring the fact that this country is built on the talents provided by people who came to America from elsewhere. Some would deny equal rights to women, gays and the less fortunate, while mouthing platitudes about equal rights. Therefore, it may be good to remember one specific historic phrase:

Marc Balakjian reminded us in the image, “In Memory of an Historic Phrase”, a color mezzotint created in 1975. 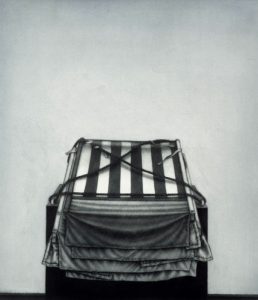 “In Memory of an Historic Phrase” – Marc Balakjian – color mezzotint – $750

Armenian by descent, Marc Balakjian was raised in Lebanon. He spent his early years in the small town of Rayak before moving to Beirut at the age of 10. He moved to England in 1966, initially to study architecture with a firm in Oxford and then decided to study art at Hammersmith College of Art. Balakjian took up a postgraduate degree in printmaking at the Slade School of Art in 1971 and after graduating, began working at Studio Prints in 1973 just as it was establishing itself in Queen’s Crescent. By 1976 he became a full time partner, collaborating with other artists such as Lucien Freud (1922-2011) as well as continuing his own work, much of which is inspired by his Armenian and Lebanese culture and heritage.

July 4th is America’s Independence Day. As we celebrate, keep in mind the thoughts stated by one of our founding fathers and the author of Common Sense:

“When it can be said by any country in the world, my poor are happy, neither ignorance nor distress is to be found among them, my jails are empty of prisoners, my streets of beggars, the aged are not in want, the taxes are not oppressive, the rational world is my friend because I am the friend of happiness. When these things can be said, then may that country boast its constitution and government.”
― Thomas Paine, Rights of Man 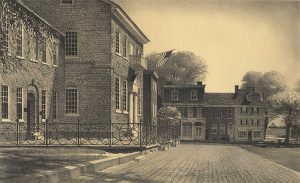 A flag flies from Courthouse, New Castle, Delaware in this 1963 lithograph by Stow Wengenroth. This image represents both the concept of patriotism and the rule of law.

Born in Brooklyn, New York, Wengenroth spent his life capturing the beauty and serenity of his region. He studied at the Art Students League and with Wayman Adams at the Grand Central School of Art. He produced his first print in 1931, a year in which he began his association with master printer, George Miller. That relationship lasted 30 years and helped to make the reputation of both men.

Wengenroth is considered a master lithographer because of his impeccable craftsmanship and the rich tonalities of his landscapes. Andrew Wyeth once called Wengenroth “America’s greatest artist working in black and white.”