“Most Americans never work as hard as when they’re trying to appear normal, and in New Orleans, we just don’t bother with that.” – Harry Shearer

In 2018, the city of New Orleans is celebrating its 300th birthday. Before its founding, Native Americans of the Woodland and Mississippian cultures lived in the area that is now Greater New Orleans.  Explorers passed through in the 16th and 17th centuries, but it was not until 1718 that Jean-Baptiste Le Moyne, Sieur de Bienville, founded New Orleans on high ground 100 miles from the mouth of the Mississippi River. The original city, centered around the Place d’Armes, which is now Jackson Square, was here 58 years before our country declared independence and 14 years before George Washington (1732-1799) was born.

New Orleans has always been a magnet for celebrated artists and writers from around the world.  This week we present a few images of the city as portrayed by printmakers.

Fred Larson (Chicago, 1868-1944) was essentially self-taught and became an adept painter, watercolorist, and wood engraver while working with like-minded friends in the group known as the Palette and Chisel Academy of Fine Arts. He taught block printing to the young Gustave Baumann at the P&C. In later years, Larson traveled to New Orleans, and produced many of his best-known images based on his experiences here and along the Mississippi River. His 1927 wood engraving, “St. Louis Cathedral”, shows two individuals observing the Cabildo, the Cathedral and the Presbytere on Chartres Street across from Jackson Square. The Cabildo was the seat of local government until 1852 and the site of the signing of the Louisiana Purchase in 1803. Later the building housed the Louisiana Supreme Court where the famous Plessy v Ferguson decision was handed down. 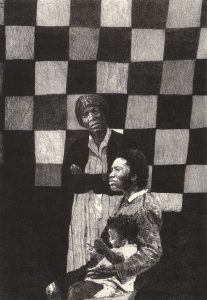 Henry Casselli (New Orleans, b.1946) studied at the school founded by American Scene painter, John McCrady. In 1967 he voluntarily enlisted in the U.S. Marine Corps at the age of 21 and was assigned to the front lines in Vietnam as a combat artist where he completed hundreds of sketches and paintings of individual Marines on the battlefield. After the war, Casselli’s paintings focused on his African-American neighbors in the ninth ward New Orleans neighborhood where he was raised. For Casselli, painting these people in their dusty, hot environs was painting what he knew.

“Generations”, a 1975 lithograph, was an Associated American Artists edition. This image puts the spotlight on the fabric of the black American family in New Orleans.

Caroline Durieux (New Orleans, 1896-1989) was a painter, printmaker, the Director of WPA Art Project in Lousiana and lifelong professor at both Newcomb College of Tulane University and Louisiana State University. Durieux started making prints in 1931 in Mexico where she worked alongside the great Mexican muralists Diego Rivera, David Alfaro Siqueiros and Jose Clemente Orozco. She chose to depict one of the plantations outside New Orleans in her 1946 satirical lithograph, “Plantation Garden”, as a dirge with ironic overtones; it is sad, nostalgic yet satirical. The bent figure of the old lady, the ancient trees, the static moss, all seem to belong to the past; even the lady is old. For contrast, a ray of late afternoon sun lights up the only young note in the picture: perennials in the foreground

George O. “Pop” Hart, (Illinois, 1868-1933) started his career painting signs (roadside and political) and designing stage sets. Known simply as “Pop,” Hart spent most of his life traveling the world. In South America, Iceland, the South Seas, Mexico, and Europe, Hart captured scenes of everyday life in casual, lively watercolors. Late in his career, this self-taught artist turned to lithographs and etchings. Museums began to acquire his work in the 1920s. Hart’s 1924 lithograph, “The Gallery, Old Opera House French Quarter”, focuses on five theater goers peering at the action from a box in the Old French Opera House. 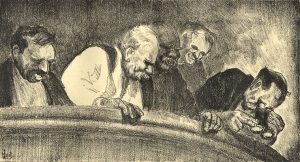 New Orleans was the first city in the US with its own opera company. By 1859, it was housed in a handsome Italianate structure on Bourbon and Toulouse streets, rising eighty feet in the air. The colossal edifice towered over everything in that vicinity. It burned to the ground in December 1919.  Hart may be alluding to the fire as one of the figures in the box seems “ghostly” and somewhat apart from the other patrons. 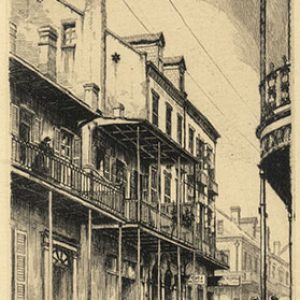 Morris Henry Hobbs (Illinois, 1892-1967) was a printmaker and architectural draftsman who discovered inspiration in the French Quarter’s historic buildings for his enduringly popular series of prints collectively titled “Old New Orleans.” In 1938, this Midwesterner made his first sketching trip to New Orleans where he found the Vieux Carré’s enclave of artists and writers welcoming and their chosen decrepit environs of creole townhouses, lush courtyards, and filigreed balconies stimulating. Concerned about the haphazard and insensitive renovations of the city’s historical buildings in the 1930s and 1940s, Hobbs envisioned his “Old New Orleans” series including the 1941 etching “Old Rue Royale” as both an artistic endeavor and a crusade to document imperiled buildings.

Moody, mysterious, majestic – these are some of the ways to describe the mezzotints of Frederick Mershimer (New York, b. 1958). His images travel through the serenity of a Brooklyn neighborhood on a still night, rush past the frenzy of taxis jockeying for position around a New York cathedral, and parade down the fire-lit streets of New Orleans in its mythical Mardi Gras celebration. The evocative realism he creates transports the viewer beyond first appearances to reveal the hidden beauty and vitality of his scene. At first glance, his work can be interpreted as bold naturalism. Yet, he skillfully choreographs lighting and detail while altering perspective to draw the viewer’s attention to the essence of each piece. 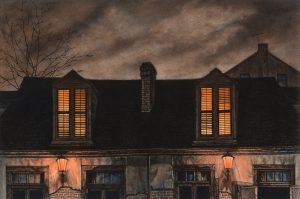 Mershimer contributes two images to our New Orleans homage. “Lafitte’s”, a 2005 color mezzotint, depicts the blacksmith shop used by the privateer, Jean Lafitte as a front. The building, located at 941 Bourbon Street, is one of the few original French colonial structures left standing in the city because its slate roof helped it survive the great fire of 1788 that swept through New Orleans. Today, it’s a popular French Quarter bar. 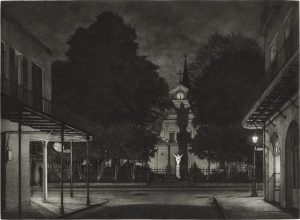 Mershimer’s 1996 aquatint and mezzotint, “Sanctuary”, shows St. Anthony’s Garden in the back of the St. Louis Cathedral on Royal Street at Orleans Avenue. The lighted statue of Christ with outstretched arms casts a larger than life shadow on the back of the Cathedral as if to welcome those seeking sanctuary from the distractions of the world. This view of the Garden could be seen from the balcony of a house in which Tennessee Williams lived and wrote. Perhaps this peaceful scene inspired the words expressed by Blanche DuBois in ‘A Streetcar Named Desire’:

“Don’t you just love those long rainy afternoons in New Orleans when an hour isn’t just an hour – but a little piece of eternity dropped into your hands – and who knows what to do with it?” – Tennesse Williams 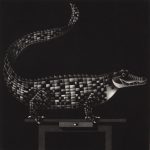