Size does not always matter. Artists have traditionally created wonderful imagery designed for intimacy rather than wall power. We focus this week on original limited edition works that speak with a strong voice despite being able to fit in the palm of one’s hand. What these images lack in size they make up in magic. 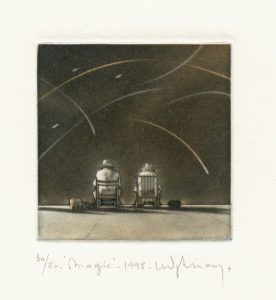 Anne Dykmans created this 1995 mezzotint, “Magic” in an edition of 50. Dykmans often uses the imagery of the beach to communicate her message. The couple looks out at the sea from their striped beach chairs as the sky fills with shooting stars or maybe flying fish. After all, the title does promise magic. Is the magic in the relationship of the couple, the drama overhead or both? There is a sense of peace and serenity in this image despite the drama overhead.

Anne Dykmans employs her superb command of engraving techniques, especially mezzotint, to create a special light, which brings out the beauty in the simplest of everyday subjects – a chair, a ribbon, the beach. In addition to the beauty of form and light, she is also able to evoke emotion as in the sensuous human dialogue we feel through the imagery of two softly swaying beach chairs on a warm summer evening.

Christine Ravaux captures the power of the sea in this 1993 image, “Surf” measuring 2 ¾ x 2 ¾ inches. The roiling waves foam and swell along the shore. Ravaux studied with Anne Dykmans in Belgium, but her sea is agitated and not serene. She uses nature in much of her work which is both hyper-realistic and abstract in pattern. This mezzotint is created in a limited edition of only 30 impressions.

Christine Ravaux was born in Charleroi, Belgium in 1961. She studied printmaking at the Royal Academy of Fine Arts in Brussels and the Etterbeek Academy of Arts where she learned more specifically the black way in the workshops of Mauritius Pasternak and Anne Dykmans. She received the Prix du Hainaut in 1994 and the prize of the 1997 annual competition in artistic creation of the Royal Academy of Letters, Sciences and Beaux-Arts of Belgium.

Ravaux’s mezzotints mirror her surroundings. She has portrayed the black hills that dot the landscape of the Belgian mining city in which she lives and has captured the shadows and shapes created by the grasses and trees of her own backyard. Her close-up look at the ordinary things around her are just as effective when viewed as abstract compositions of form and light. Her work was awarded the first prize at IBIZAGRAFIC ’92, the prestigious Spanish Biennial which prompted a solo exhibition of her mezzotints and the publication of a monograph. In 1994, Ravaux was selected for inclusion in Intergafia ’94 – World Award Winners Gallery in Katowice, Poland.

Joop Vegter shows the beauty of an object washed onto the beach in his 1997 color mezzotint, “Pink Shell”. Vegter was one of the true masters of the use of color in the mezzotint technique. He worked almost exclusively in still life and this rendering of a pink shell contrasted on a background of dark red and blue is representative of his work. It measures 1 ¾ by 1 ¾ inches.

Joop Vegter (Dutch, 1931-2017) started his career as a teacher of art in 1963 and in 1968, he assumed a teaching post at the Academy of Fine Arts in Amersfoort where he was given the responsibility for setting up a graphic arts department. His goal was to teach his students all graphic techniques, including mezzotint – a technique with which he was not then familiar. However, he quickly became fascinated by the technique and became a recognized master in the difficult technique of creating mezzotints in color. A catalogue raisonne of Vegter’s mezzotints was published in 2001. His work is included in the Rijksmuseum in Amsterdam. 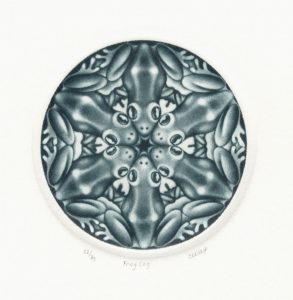 Carol Wax has throughout her career created small gems depicting certain creatures such as elephants, crawfish and zebras in a repeating pattern within a three inch circular format. Her 1986 mezzotint, “Frog Cog”, creates a sense of motion through an arrangement of six bug-eyed frogs facing into a circle with legs splayed. It is printed in a blue-black ink in an edition of 35. 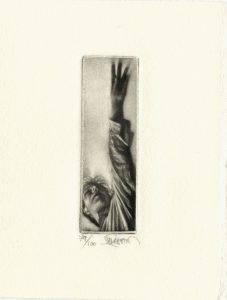 Maurice Pasternak was born in 1946 in Brussels and pursued the study of art from 1963 – 1968 at ENSAV, Belgium’s national academy for the training of students with superior artistic ability. Since graduation, he has engaged in the creation of drawings, pastels and mezzotints. In addition, he served (beginning in 1982) as the chief professor of art and the designer of the art curriculum at his alma mater.

Since 1971, Pasternak’s work has been awarded more than twenty international prizes at biennial competitions throughout Europe, Asia and the United States including the Prix Special De L’Edition at World Print Four in San Francisco and the Walker Prize at the Philadelphia Print Club. He has had numerous solo exhibitions on various continents and his work is included in museums in Japan, Taiwan, Belgium, Poland and the United States.

In 1994, Pasternak had a solo exhibition at the Musee des Beaux-Arts de Mons in Belgium and was selected for inclusion in “Intergrafia `94 – World Award Winners Gallery” in Katowice, Poland. He was a guiding force in the 1994 Belgium-Japan Print Exchange Exhibition.

Carol Wax wrote this about her 2001 relief intaglio that measures 5 x 1 ½ inches:

“Missing Peace” depicts two deer whose elongated legs create silhouetted twin towers as pieces missing from the New York skyline against a backdrop of snowflakes and stars that seem to both weep and offer glimmers of hope. This image touched so many people that I came to see how art really does have the potential to affect and heal.” 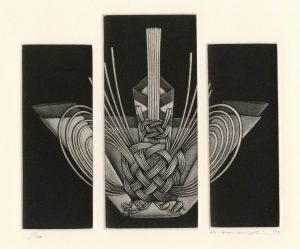 Katsunori Hamanishi created a 1999 mezzotint, “Mizuhiki”, 5 x 7 inches, which features a ribbon-like decoration first used in wrapping gifts. This tradition evolved into a fine art of weaving ceremonial cords into souvenirs for festive occasions like weddings and new year’s celebrations. These cords often included elegant designs with motifs of plants, animals or fish. In this image, the shape of a turtle, a symbol of good luck and longevity to the Japanese people, was used.

Hamanishi is one of a group of Japanese artists who have explored the rich, dark, three-dimensional effects achievable with the old European mezzotint techniques. It is probably the most demanding of all printing methods, and Hamanishi has reached exceptional technical proficiency in it. His early subjects-twigs, branches, rice stalks, rope are presented in a three-dimensional form on paper. These are not produced from photographs, but each image has been painstakingly burnished on the plate. More recently he has begun to introduce color into his works of Japanese architecture and landscapes, adding metal plates or gold or silver leaf to his stunningly beautiful compositions. Permanent Collections: Metropolitan Museum of Art, New York; Museum of Modern Art, New York; Art Institute of Chicago; Library of Congress, Washington. 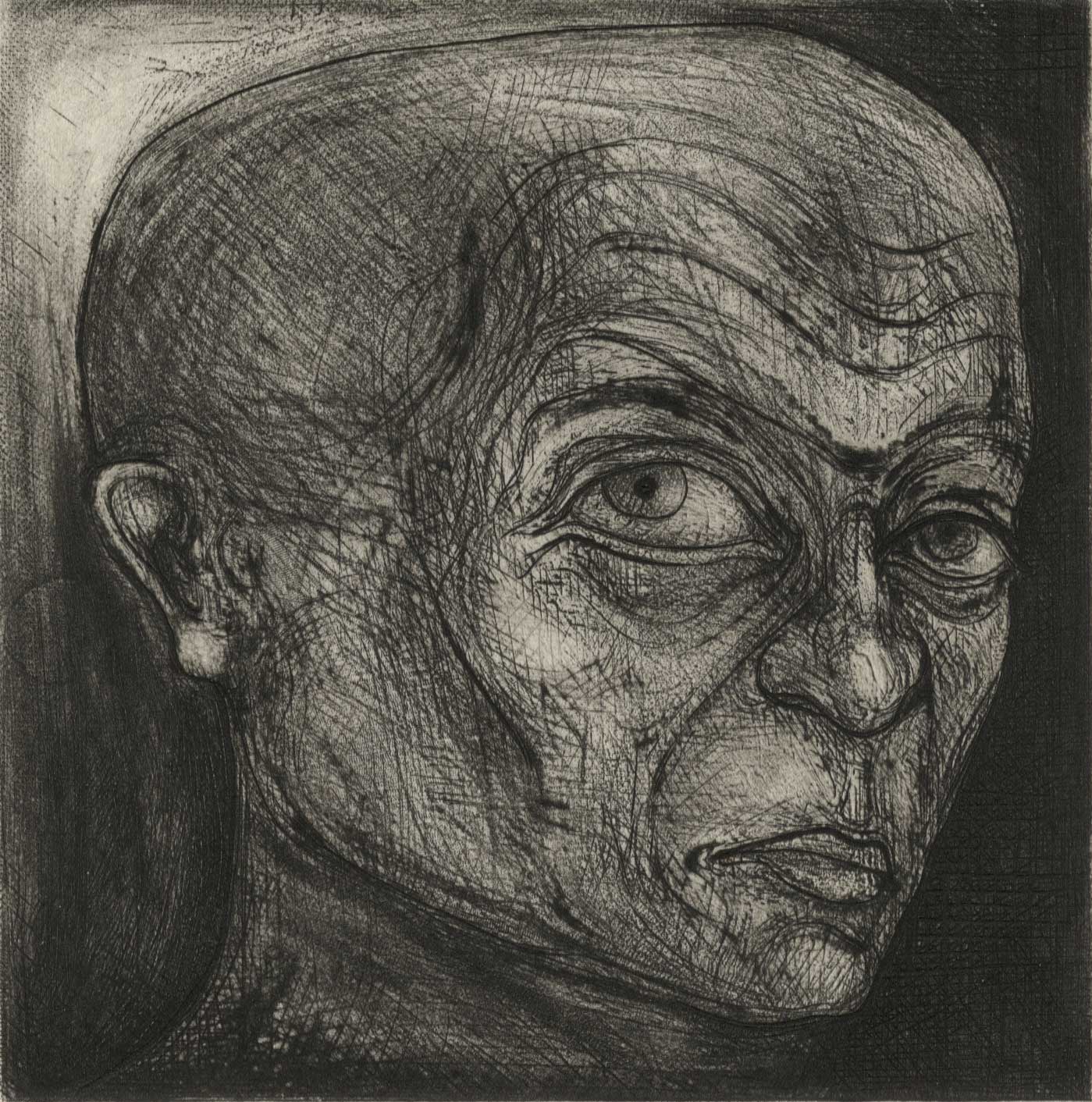