Summertime – a State of Mind

Summertime – a State of Mind

“Summer was on the way; Jem and I awaited it with impatience. Summer was our best season: it was sleeping on the back screened porch in cots, or trying to sleep in the tree house; summer was everything good to eat; it was a thousand colors in a parched landscape; but most of all, summer was Dill.” —Harper Lee, To Kill a Mockingbird

While summer has an official season (June 21 through September 22), it is more a state of mind. We think of longer days enjoying beaches, barbecues, baseball and books. We imagine a world that relaxes and slows. Even in the world of ‘Porgy and Bess’, we see a disabled street beggar and an abused addict sing of a season where “the living is easy, fish are jumping and the cotton is high” in the slums of Charleston.

This week we recognize the start of the summer season through imagery created by a diverse group of artists.

Hammocks are an iconic symbol of summer and relaxation. In Joseph Hirsch’s 1969 lithograph, ‘Hammock’, a couple embraces as they relax on a lazy summer afternoon. We are left to imagine the specific circumstances of the scene; however, the living does seem to be easy.

Joseph Hirsch (1910-1981) was born in Philadelphia and studied at the Philadelphia College of Art and later with George Luks. A member of the American Academy-Institute of Arts and Letters, Hirsch was a well-known realistic artist who came to national attention as a muralist for the Federal Works Progress Administration in the 1930’s. He taught painting at the Art Institute of Chicago, the National Academy of Design and the Art Student’s League.

After the heat of a summer afternoon, it may be fun to visit one of America’s iconic amusement parks, Coney Island. Grab a hot dog, an ice cream or cotton candy after riding the Cyclone or a giant ferris wheel. Or maybe just watch the parade of people passing by. Frederick Mershimer’s mezzotint with aquatint, ‘Surf Avenue’, is a nighttime view of the birthplace of the amusement park.

Frederick Mershimer (b.1958) received a BFA from Carnegie Mellon University, where he majored in painting and drawing. After moving to New York in 1983, he studied printmaking at The New School, the Pratt Graphics Center (1984 – 1987) and the Manhattan Graphics Center (1988 – 1992). He was initially drawn to the mezzotint process because it echoed his approach to drawing. In 2007, Stone and Press published a catalogue raisonné of his work, titled “Frederick Mershimer Mezzotints 1984 – 2006”. Mershimer’s works are included in the collections of the Brooklyn Museum, the Cleveland Museum, the Corcoran Museum, the Fogg Art Museum, Georgetown University, the Library of Congress, the McNay Art Museum, the New Orleans Museum of Art, the National Museum of American Art and the Whitney Museum.

It would not be summer without a day at the ballpark with the boys of summer. Larry Welo’s 1999 color etching ‘High and Outside’ gives us a drone’s view of the traditional baseball diamond with the players and umpires designated through the dramatic shadows they cast on the field. A base runner stands with a big lead off third base and the left fielder is only visible through the shadow he casts. It’s a bright, sunny day at the park and there is no doubt that cold beers, peanuts, and hotdogs are being enjoyed by all.

Larry Welo (b. 1951) has been creating etchings since the early 1970’s.  A graduate of Luther College in Decorah, Iowa, Welo had a studio in Minneapolis until moving to Wisconsin, where he currently lives.  His etchings cover a broad range of topics and offer witty perceptions about the world which sets him apart from many other artists.  Scenes from small midwestern towns, spirited cats, images of baseball diamonds or bicyclists — all of these subjects are fertile territory for Welo’s wit and skill as a printmaker.  His prints on baseball themes are included in the Sports Art Archives at the Butler Institute of Art and in the National Baseball Hall of Fame, as well as corporate, private and university collections in the Midwest.

Summer vacations are a tradition and the state of Maine is one of America’s great summer getaways. Artists from Andrew and Jamie Wyeth to Rockwell Kent and Alex Katz are just some of its summer residents. Another one, James Groleau (b. 1960) created ‘Grand Marsh’, a landscape of puffy clouds over the peninsula east of Prospect Harbor near Corea, Maine. It is from his Salt Granite Spruce portfolio which is comprised of eighteen color mezzotints depicting coastal Maine.

The mysterious mezzotints of James Groleau, whether the earth-toned studies of death and personal introspection, or the brightly colored floral and portrait series, reflect an interest in order in the universe and man’s place within it. He studied at the Massachusetts College of Art and the City College Printmaking Program in San Francisco. He exhibits both nationally and abroad and has received numerous awards. He is a member of the California Society of Printmakers and a board member of the Graphic Arts Workshop in San Francisco. 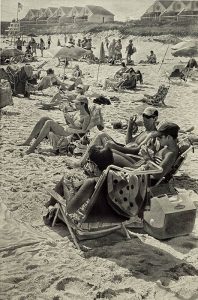 Summer at the beach is another of the season’s rituals and Art Werger’s large etching and aquatint, ‘Tidal Shift #6’, shows the beachgoers relaxing in their chairs on the shore at Montauk, New York. The artist is making a statement not only about the coastal tideland being endangered by climate change but also to the mindset of the people. They are relaxing by the sea seemingly unaware of the forces of the rising ocean and how their consumer habits might be contributing to an eventual outcome that promises to be alarming. The living may be easy this summer but there may be consequences to come.

Art Werger (b. 1955) is a Professor of Art in the Printmaking program at Ohio University where he was recently named a Presidential Research Scholar. He also taught at Wesleyan College in Macon, Georgia, where he served as Division Chair of the Fine Arts. Werger received his BFA from Rhode Island School of Design in printmaking in 1978 and his MFA from the University of Wisconsin in 1982. As a master printmaker, he works with aquatint, etching and mezzotint. 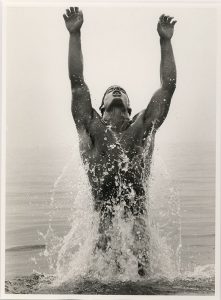 What better way to escape summer’s sizzling heat than submersion in cool ocean waters? Dianora Niccolini’s 1982 sensuous nude photograph, ‘Kenny Surfacing’ shows a young male rising out of the surf with his arms reaching for the sky. It’s symbolic of an awakening, a rebirth, the exuberance of youth.

Dianora Niccolini (b.1936) had an American mother and a father from an old Florentine family. At age nine, she came to the United States and eventually went to New York City to study art. After meeting William Weege in 1963, she took up photography. Niccolini is considered one of the female pioneers of the male nude in photography and was the first president of the Professional Women Photographers, recognized as the leading professional organization for women photographers. She has taught photography at the Germain School of Photography, the New York Institute of Photography, the New York Institute of Technology and the Learning Annex.

As summer draws to a close, nights will start to cool, leaves will begin to change and schools will reopen. The overall pace of life will speed up. Anne Dykman’s ‘Inclination’, a 1989 etching, seems to show the shore near the end of the season. A brisk wind whips the striped fabric of a single beach chair while others sit stacked together. With no people in sight, the deserted beach suggests the season’s end. Chairs will be stored away until the start of next year’s season. 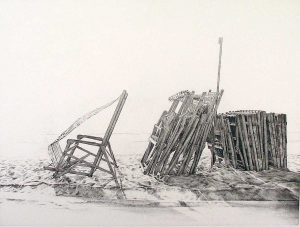 Anne Dykmans (b. 1952) is a Belgium professor and printmaker who uses her summers to enjoy the water by the Spanish shore. She studied at Belgium’s National School of the Visual Arts and employs her superb command of engraving techniques to create a special light, which brings out the beauty in the simplest of everyday subjects – a chair, a ribbon, the beach. In addition to the beauty of form and light, she is able to suggest a narrative that evokes an emotional response.